I’m sure he’s lovely, but International Women’s Day is NOT about your husband 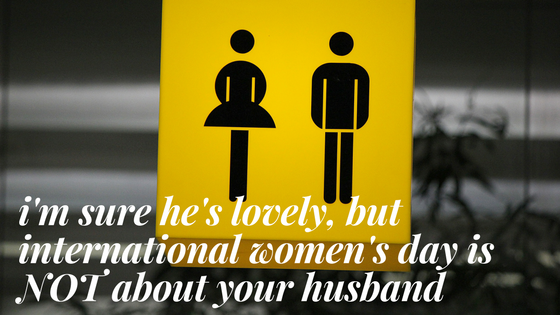 In case you missed it, and I hope you didn’t, today was International Women’s Day.

My Insta and Facebook feeds have been filled with inspirational messages and images for and about incredible women doing spectacular work across the globe. It’s the one day of the year specifically carved out for us to say “thank you” to the women who inspire and educate us.

But in recent years I’ve seen a funny phenomenon happening. No, I’m not talking about the “But-When-Is-International-Men’s-Day” comments, because by now we all know International Men’s Day is held on November 19th annually. And hopefully we all know that men do, indeed, have a lot to speak out about. Such as the fact they face much higher rates of suicide than women, have a shorter life expectancy than women, have a 10pc chance of experiencing postnatal depression, not to mention the centuries of engendered toxic masculinity that systematically denigrates men who display emotion, who happen to be gay, or who choose to move into an historically female profession. The list goes on, so let’s talk about that more in November. Or even tomorrow.

Because TODAY is international Women’s Day.

A day for women.

It’s a day which serves a dual purpose. Firstly to recognise and celebrate the hordes of amazing women who fought tooth and nail throughout history in the battle for gender equality. There’s a brutal and disquieting history there – the women who led these movements were warriors, and many of them paid dearly for their part in the fight.

Secondly this day serves as rallying point in the continued campaign for equal rights, equal economic and political representation and pay parity. There is still much work to be done on all these fronts.

Which makes me wonder why, on this day of all days, are women choosing to dedicate today to the men in their life? This is the phenomenon I’m wondering about.

Have you seen it? This trend of women dedicating International Women’s Day to their husbands, partners, fathers, sons, brothers?

I see it happening – I see women I respect, admire and love doing it. But I can’t support it.

Here’s why I disagree with the concept of dedicating IWD to men, no matter how supportive or feminist he is.

It’s disrespectful to the women who came before us. Who endured incredible hardship and lack of agency. Who lived their lives as the property of men, and who never had the opportunity to dream of a life of freedom.

It’s disrespectful to the women who were imprisoned, punished, tortured, raped or even killed for daring to speak up, for daring to say “women are equal to men and we deserve equal rights”.

It’s disrespectful to the millions of women across the globe who, still today, don’t enjoy the same level of privilege that those of reading this right now, do. The women who are trafficked for sex, the little girls whose genitals are mutilated, who are married off as children to men thrice their age, the women who are prisoners in their own home as victims of domestic violence, the women who put up with sexual harassment in the workplace because they fear speaking up in workplaces still overwhelmingly run by men.

Let’s look at this from a different perspective:

Would you dedicate NAIDOC week to those caucasian colleagues you know are tireless supporters of Indigenous Australians?

Would you dedicate International Day of People with a Disability to the work of all those able bodied rehabilitation professionals who so valiantly work with people with disabilities?

Because you know it would be incredibly disrespectful.

So what makes THIS day different?

I understand why you want to thank your husband, your father, your sons.

I have no doubt they are wonderful, inspiring, intelligent men. So feel free, go ahead and thank them – tomorrow. Why can you not thank them on any one of the 364 other days of the year? What makes TODAY the best possible day to thank them? The day that you single them out, over and above all the amazing women in your life?

And have you spoken to them? Have you asked them how THEY feel about the fact that you’re dedicating International Women’s Day to them? What did they say? Is there anyone else they can identify who might deserve praise and acknowledgement today, before them? Have they posted on Instagram dedicating the day to YOU and your daughters, and thanking you for all you’ve done to further the cause of women’s rights? That wouldn’t be too much to expect, would it?

Yes, the support and advocacy of men is an important aspect of the push for women’s rights. And raising a future generation of males to be respectful and supportive of women is one of the most important things a parent of sons can do in our current day. But placing men on a pedestal for supporting women feels disrespectful – not only for women, but for men too. We shouldn’t need to laud men for being decent human beings. We shouldn’t need to heap praise on our husbands for doing their equal share of the dusting, or for doing school drop offs, or packing lunchboxes. We shouldn’t need to thank men for doing these things for us, because they ARE NOT WOMEN’S WORK. These are the tasks that are required to run a household and a family, and when a household consists of an adult male and an adult female, shouldn’t those tasks be shared equally, with both parties being equally as grateful to the other for undertaking their fair share part of the tasks require to keep a home?

We shouldn’t feel the need to mollify men on International Women’s Day. Because the men who “get” IWD don’t need appeasement – especially not today. And the ones who don’t get it… well perhaps they’re not entirely on our side anyway?