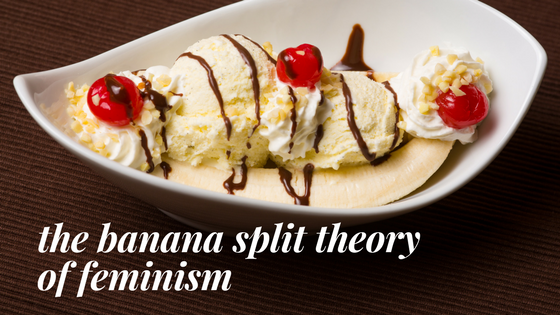 The Banana Split Theory of Feminism

Please indulge me while I use a food analogy that popped into my head last night as I pondered the goings-on of International Women’s Day.

I feel like I can explain the current status of the women’s rights debate as if it were a banana split.*

Triple Cream, a scattering of crushed peanuts and a juicy, plump cherry – right on top. 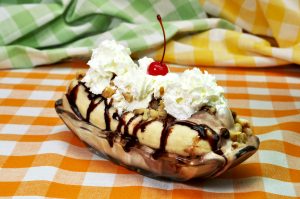 A banana split that, until very recently, was only available to men.

When this banana split first came on the menu, women were in no way, shape or form allowed to be served this delicious dish. And of course, women eventually decided that was no longer acceptable – because they were no longer content to rely on a man to buy them a banana split, or share their own.

They fought hard, decade after decade, to claim their right to this dessert.

First they claimed the big banana – the right to vote.

Then came the ice cream – the right to own their own property.

Then over the years we were finally given access to the mountains of hot fudge and whipped cream that make up the bulk of the toppings – greater workplace participation, reproductive freedom.

We’ve even managed to get our hands on those delicious crushed nuts to sprinkle over the top of our already delicious creation. Provision of quality tertiary education and increased access to the halls of power.

And there you had it – women were finally completely entitled to our very own banana split.

And man, oh man, if it wasn’t delicious!! It was so satisfying to know that at any time we wanted we could order this delicacy and indulge ourselves on all these ingredients men had been privileged to for so long.

Because, for all intents and purposes – what we have now is in fact, regarded as a whole and complete banana split. If you looked at it’s description in a menu you’d say to yourself – Yes, that’s exactly what I want: a banana split – with delicious bananas, and ice cream, and cream and hot fudge and – woah – I even get crushed nuts – I LOVE crushed nuts.

And you’ll think this is everything you could ever want – by the time you finish eating it, you’re full, you’re content, and you’re pretty proud of yourself for choosing this epic banana split.

You look up to share your post-indulgent satisfaction with the rest of the room, And you look over at the man on the table next to you. He’s just been served up his banana split – and you’re about to tell him how great that dish is, and how much he’s going to love it. Until you notice something.

HIS banana split has a cherry on top.

You watch as the man nonchalantly picks it up by the stem and chomps it down in one bite.

“Hey mate, did you ask for a cherry to be added to your banana split?” you ask the man.

“No I didn’t,” he replies. “There’s always a cherry on top when I order a banana split. To be honest, I never really noticed it there.”

“Bugger,” he replies. “Well, I bet your banana split was still delicious anyway”.

And it was. It was delicious. Until you noticed the absence of that cherry, you thought that banana split was the best thing in the world. It satisfied you, you Instagrammed it, and you were totally intending on ordering it again next time you came back to this restaurant.

“Maybe it was just a once off,” you tell yourself – an honest mistake by the chef?

But then you look around at all the other people in the restaurant, and lo and behold, they’ve all got banana splits! What are the odds? You look closer and you realise that every man has a cherry on top of his banana split, but none of the women do.

You continue to watch with curiosity at what these men and women do. Some of them realise the cherry disparity. Some of the men spontaneously offer their cherry to the woman closest to them. Some of the men ask the waiter for a knife so they can cut their cherry in half and share with the woman. Some of the women look longingly at their male counterpart’s cherry, but dare not ask him to part with it. Some of the women ask the waiter for their own cherry from the kitchen. Some of the other women abuse their partner over the fact they got a cherry and she didn’t. Some of the men don’t even notice their cherry. Some men don’t want theirs, setting it aside on a napkin. Some men are so worried a woman will steal it they guard it ferociously. Some women notice there’s no cherry, but don’t care – they never really cared much for cherries anyway. Some men notice those women not caring about the cherry and surmise that’s how all women feel about cherries. Some women don’t even notice their missing cherry. Happily chowing down on that delicious banana split – just grateful they have access to it.

Me. I want that cherry.

I want that cherry for my daughters.

I’m going to be the woman in that restaurant who speaks up and says, “Hey, has anyone noticed that the women have cherries? Waiter, can you please bring cherries for all the women too. Maybe some of the women want them, and maybe some of them don’t, but I believe that all women should have access to those cherries, just as the men do.”

Because that cherry represents what we’re still working towards as women. Equal representation in the halls of power, equal pay, the ability to feel safe in our society, freedom from domestic violence and unconscious bias.

If the banana split is women’s liberation, the cherry is gender equality.

We’re now liberated. But we still have a right to that cherry.

* Please excuse the unintended gendered symbolism in the banana split analogy – it wasn’t until I was reading it back that my brain picked different links to the imagery of bananas, cherries, whipped cream and crushed nuts!